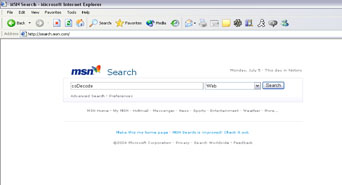 And if it’s true that imitation is the sincerest form of flattery than Google must be blushing because both MSN and Yahoo followed the lead of minimalist search kingpin Google.

More than anything else the changes show that the search engine wars, once forgotten just like the browser wars (oh come on you remember Netscape vs. Explorer!), are back. My bet is still on Google not only because they do a good job at what they do but they actually know what they do. A quick look at the Google website reveals their guiding mission, “to organize the world’s information and make it universally accessible and useful.” This very focused approach to what they do will not tie them to any particular product or technology and has helped them grow from web-based search to a whole suite of products, services, tools, and targeted searches from Froogle and Google News Search to tools like the Google Toolbar, Keyhole (a robust map service they acquired) Google Desktop Search and GMail.

With interest and investment in other areas it’s been speculated that Google might be launching a new browser and instant messaging product, all presumably tied to information organizing and retrieval. This is why it should come as no surprise that Google co-founder Larry Paige was quoted in The Register talking about the prospect of googling your brain, “On the more exciting front, you can imagine your brain being augmented by Google. For example you think about something and your cell phone could whisper the answer into your ear,” said Paige.

Google apparently bought into the idea that content (i.e. information) is king and decided that if they made it easier for users to find the content they wanted and not the content the portal or search engine wanted the user to find then they would reap the benefits of owning that relationship between user and information.

Let’s see how long they can keep that focus.