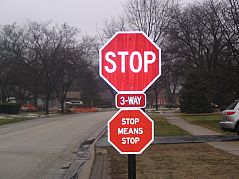 I recently heard a report on National Public Radio about a town outside of Chicago that has created a new road sign designed to be used in conjunction with the universally recognized stop sign.

Officials from Park Ridge, a Chicago suburb, contend that the universally recognized standard stop sign is no longer effective and only serves as an invitation to slow down. The new sign, also a red octagon, reads “STOP MEANS STOP” and is installed just below the existing stop sign.

As a design educator I discuss with my students the responsibility of a designer to ensure a design effectively communicates its targeted message to its audience. We do as much as we possibly can to ensure that the audience or user (in this case driver) knows what to do and how to do it. For this to happen we must first recognize that people are not the same and that an individual comes to a situation with their own knowledge and experience set. To prevent errors, mistakes, and miscommunication it’s the job of the designer to ensure the most effective information design for the maximum numbers of intended users.

Given that, you might think that I would support the new Stop Means Stop sign but I don’t. The supplementary stop sign in Park Ridge sets a dangerous precedent and will ultimately dilute the meaning and efficacy of the stop sign. A stop sign means stop. It’s simple, it’s clear, it’s instantly recognizable and the color and shape is employed around the world. Put simply, less is more.

By installing a secondary sign in specific locations the meaning of this very simple and clear sign is degraded. The town of Park Ridge is essentially saying “here we really mean it but in places with just one sign we don’t really mean it. As a design strategist I think it’s crucial to evaluate the use, context, and implementation of any design in order to ensure it’s doing what it was created to do. With road signs two things should be effectively communicated; 1) Convey the information on the sign 2) Explain the type/category of sign.

There are eight basic road sign types as defined by the Vienna Convention on Road Signs & Signals. This intentional treaty created a simple, organized and very specific system to ensure that road signs are consistent and easily understood. If you ever wondered why stop signs are always red octagons and why highway exit signs are always green you can thank the Vienna Treaty.

The problem in Park Ridge is not an issue of conveying the right information it’s an issue of compliance and enforcement. What needs to be communicated is that not stopping will not be tolerated and drivers won’t get away with it. Adding another sign may temporarily draw attention to the sign but in time, if the real problem is not addressed, drivers will most likely ignore the second sign as well as the first one.

So is there a solution? You bet. I would suggest that the folks in Park Ridge focus their energies on a solution that addresses the actual problem- enforcement rather than compounding it with over-communication. And if Park Ridge is like many communities and doesn’t have the resources to put traffic cops or patrol cars at every problem intersection, than Perhaps the same community members who have called to complain about drivers not obeying the stop signs could be trained and empowered as community traffic patrollers in a program like Citizens on Patrol with the power to issue citations. This would address the actual problem, involve the community, generate revenue, and likely discourage further violations.